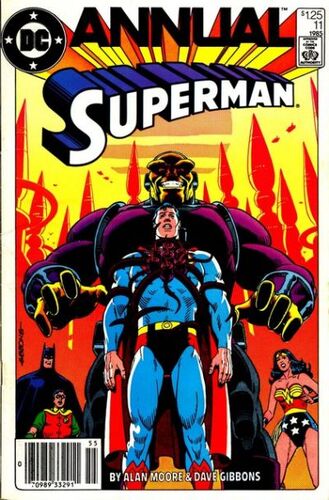 The Last Sons continue their Super journey with a listener request - it also happens to be a damn classic!

Alan Moore and Dave Gibbon's masterpiece, 'For the Man Who Has Everything' is given the spotlight this episode, alongside the usual Kryptonian chat between the House of El (Connor) and the House of Zod (Rey).

Tune in to hear if the Last Sons hold the same opinion of this seminal issue, as you, the Super fan!

Batman, Robin, and Wonder Woman pay Superman a visit at his Fortress of Solitude, with Batman and Wonder Woman bearing gifts for the Man of Steel's birthday. However, upon their initial entry, they see Superman standing rather still with a strange alien plant attached to his chest and wrapping its tendrils around him. They call out to him, but Superman doesn't respond. His mind is entranced by a vision he sees...

...a vision of him being on a Krypton that never exploded, living out the normal life of an average Kryptonian, being married and having a son and a daughter. He comes home from work and is greeted by a surprise firstday party which most of his family, except for his father Jor-El, attends. His father has become angry and bitter over being the laughingstock of the Science Council for predicting the end of Krypton which never happened, and is now joining with an extreme political sect called the Sword of Rao in the hopes of restoring Krypton to the way it used to be.

As the three heroes try to determine where the plant came from and what it's doing to Superman, a gigantic yellow-skinned muscular humanoid male named Mongul shows up, telling them that the plant is a Black Mercy, which gives its victims the desire of their hearts, trapping them in a dreamworld that they cannot escape from. He challenges the three heroes to take him on one-on-one to find one among the Earth beings worthy enough to kill. Wonder Woman steps up to the challenge, nearly breaking her hand when she gave Mongul a punch. Mongul throws her through a wall, where she enters the weapons room of the Fortress, and uses one of the more powerful energy blasters to take on Mongul. Meanwhile, Batman tries to reach out to Superman to get him to snap out of his dream world as he attempts to unwrap Black Mercy's tendrils from the Man of Steel.

On Krypton, Kal-El meets his aunt Allura in the hospital to comfort her when his cousin Kara fell victim to a violent protester demanding the release of the Phantom Zone criminals. He calls his wife and tells her to go someplace safe with their daughter and that he and their son will meet her there. Along the way Kal-El finds a gathering of Sword of Rao loyalists hearing Jor-El's charged speech about the current state of affairs on Krypton. Finally he takes his son to the site where the city Kandor used to be, and tells him that he has a feeling that nothing he has experienced is even real. Soon he starts to see his son and all Krypton vanish before his eyes...

Batman succeeds in pulling Black Mercy off Superman's body, only for it to now latch onto him and give him a fantasy based on the desires of his heart. In Batman's fantasy, he sees that his father, on the night that his parents were murdered by a low-life criminal on the street, succeeds in overpowering the criminal and thus preventing the murder from ever happening. Bruce grows up happily, marries Kathy Kane, and they have a teenaged daughter.

Superman, now freed from the Black Mercy's thrall, attacks Mongul in a rage, angry that he had been pulled from his fantasy of being on a Krypton that was never destroyed and losing everything that was so dear in the process. During this fight, Robin uses the gauntlets that Mongul pulled off his hands and grabs Black Mercy, pulling it off Batman and carrying it to where he would hope to dump it on Mongul.

The fight between Superman and Mongul, with neither side prevailing, carries over into a room where the Kryptonian is distracted by the statue of his parents holding up a globe representing the lost world of Krypton, and Mongul uses it to pummel Superman. However, Mongul is distracted by Robin calling to him and sees him through a hole in the ceiling one floor up. Robin then drops Black Mercy right on Mongul, and instantly it wraps itself around Mongul, giving him a fantasy of his own heart's desire. In that fantasy, he kills Robin as well as Batman, Superman, and Wonder Woman and then takes over as the leader of a new Warworld. In reality, Mongul simply drops to the ground, with the heroes now relieved that the fight is over.

Batman and Wonder Woman finally present their birthday gifts to Superman. Wonder Woman shows him a perfect replica of the Bottle City of Kandor made by the Paradise Island Gemsmiths. He quickly goes to hide the replica he already has before taking the one from Wonder Woman and kissing her. The two think about a romantic relationship, but concede it will be too predictable. Batman shows him a new species of a plant blossom called the Krypton -- a blossom that ended up being crushed during the fight. Superman nonetheless is pleased that his friends and allies have even thought of bringing him gifts and then offers them coffee.