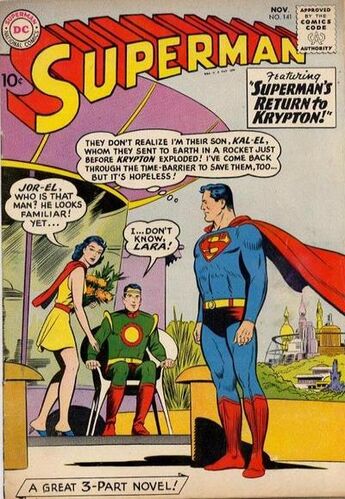 The Last Sons return to a new year with a bag full of comics to review and news to talk about!

There's a new Superman statue which looks pretty damn sexy; there are a couple of new issues (Action Comics #1018, and Batman / Superman #5) to get all excited about, plus we look at the first part of our coverage which sees Superman return to Krypton (Superman #141) , in this Silver Age classic issue!

It's all right here - so what are you waiting for?...Tune in and enjoy!

While out on patrol, Superman is stopped by Professor Galsworthy at the Metropolis Observatory, who has made an astonishing discovery. Showing Superman his telescope, they find a strange planet out in space, Superman goes to investigate and learns that it's actually a living creature. Upon his approach, the living creature flees, Superman chases after it but goes too fast and ends up flying through the time barrier and into the past. Finding himself in a sector of space before Krypton exploded, he begins to lose his powers due to proximity to the system's red sun. Trapped on Krypton, Superman frets over the fact that now that he is stuck on Krypton, he will be as doomed as everyone else when the planet explodes. To his surprise, he thinks he stumbles upon a space ship, however he soon learns that it's just the set of a science fiction film that a Kryptonian film company is working on. Pretending to be a member of the cast, Superman meets a pretty blond actress while on the set. Later, the director asks Superman to continue wearing his "space uniform" (his Superman costume) all the time as publicity for the film.

Exploring Krypton, Superman hears reports of his parents, Jor-El and Lara, and how they intend to get married that very day. Wanting to see the momentous occasion, Superman is a guest at his parents' wedding. Deciding that he wants to get to know his parents, he orchestrates a meeting with them, and quickly befriends Jor-El and Lara. They hit things off, and soon Superman is hired on as an assistant working with his father, he assists him on his rocket project. Later, Jor-El introduces Superman to Lyla Lerrol, the blond woman he was "working" with on the set of the movie "The Space Explorers." The two end up spending a lot of time together over the coming days and eventually begin to fall in love. Superman struggles with keeping his true identity secret from his parents, wanting so badly to tell them who he is. He and Lyla end up expressing their feelings for one another and share a romantic evening.

Continuing his work with Jor-El, Superman is told about Krypton's intended doom, and how he intends to build a fleet of space ships so that his fellow Kryptonians can leave the planet. He shows Superman that he's been observing the planet Earth, and ironically he's been monitoring the lives of Jonathan and Martha Kent to learn about Earth culture. Revealing to Superman that Jonathan's attempts to courting Martha are co-opted by a crooked banker. Left alone, Superman uses a Kryptonian weapon to expose the man as a criminal, which leads to the timid Jonathan Kent knocking him out in front of Martha, and the two falling in love.

Believing that perhaps he can prevent his family from perishing when Krypton is destroyed, he learns that fellow Kryptonian Ken-Dal has a new fuel that may assist in Jor-El's plan to save everyone. Seeking out Ken-Dal with Lyla Lerrol, they just barely avoid capture when Brainiac arrives on Krypton and steals the city of Kandor -- where Ken-Dal lives -- ruining any hope that Superman could use him to save everyone on Krypton. Later, Lara learns that she is pregnant, and with Jor-El's approval, they agree to name their son Kal-El, after their friend Superman. Later, Jor-El and Superman go to an active volcano to learn more about Krypton's impending doom, and just barely manage to escape with their lives.

Being called back to the set of the movie, Superman films the final scenes of the film with Lyla, and they all have a wrap-up celebration. During the festivities, a fire-breathing beast gets loose, both it and Superman are in the mock-up space ship when the creatures fire breath causes the ship to fly off into space, Superman's sudden exit devastates Lyla. Being taken into the proximity of a yellow sun, Superman's powers are restored and he uses them to travel back through the time barrier back to the present, deciding that protecting the Earth in the present is more important than his romance. Back in the present, Superman narrowly dodges some Green Kryptonite meteors before returning to Earth where he reflects on his adventure in the past, but is glad to be home.